The pandemic has challenged us all in the last 18 months. However, since P J Hayman’s origins in 1990, we’ve continuously innovated. Using our strong expertise we create and enhance a range of specialist products to cover a wide range of hard-to-place risks.

We all want insurance while travelling for different risks. Some are known to us. Others may never cross our minds.

In 2001, it was one of our policies that looked after one customer while they were stranded in America. Travel was impossible due to the devastation of the 9/11 terrorist attacks. On the 20th anniversary of 9/11 in 2021, the customer got in touch to remind us of what had happened.

In 2001, Robert Williams was a Royal Air Force (RAF) Warrant Officer (WO) for the British Military.

Outside of work, he was (and still is) a keen traveller after enjoying holidays to Morocco and Mexico. That year, he decided to book a holiday for him and his partner to visit America in September. The holiday involved exploring Washington, North, and South Carolina on the Atlantic coast staying at several hotels, then a return flight from Washington D.C.

Robert knew that while working away with the RAF, insurance was always included. Due to the nature of his job, one of the RAF’s regulations stated: you must always have insurance when travelling outside of work. You’re not covered when you are not away with the MOD.

Therefore, while working in London, Robert came across P J Hayman and booked holiday insurance for the trip. It was a standard policy, which had to cover the USA with no specialised requirements. Robert remembers it being good value for money.

The problem that ensued 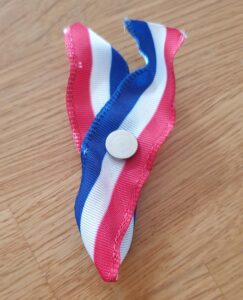 On Tuesday 11th September, Robert and his partner were staying in a hotel in Washington. Having watched the news broadcast, of the aircraft crashing into the Twin Towers in New York, they were shocked to see the plane overhead subsequently used to attack the Pentagon.

For the following six days, they were stranded in Washington. First, Robert tried to get hold of the airline company, which was impossible. So, he contacted the British Embassy to see if he could offer his help and services at the Pentagon. However, his services were not used because the situation was highly chaotic and only US citizens could be cleared for service at that time. The situation was volatile, unpredictable, and as such, all aircraft were grounded except for the military.

While at a nearby diner, Robert spoke with a US Army Colonel who was working in the same wing of the Pentagon where the plane crashed. It was this Colonel who gave him what he described as a ribbon of peace.

After a longer stay than planned, Robert and his partner flew back to the UK. Soon after, the rules were changed and rewritten for insurance purposes.

Robert sent all the relevant letters, paperwork, and receipts promptly to P J Hayman, who paid out for the extra six days in America.

A quote from Robert Williams

‘I don’t know how many claims were made and paid out to customers caught up in 9/11 if any?

I still have the letters, receipts, etc. that I sent to you and your letter awarding me payment for expenses for the six days we were stranded because of the terrorist attacks.

I thought you might be interested to know that on remembering this day, I also remember that you paid out my claim. This was possibly unprecedented at the time as a result of a terrorist incident.

I was grateful and surprised. I thought it might be interesting and of historical value to know that you made a payment related to the 9/11 attacks to a customer who was there in America.’ 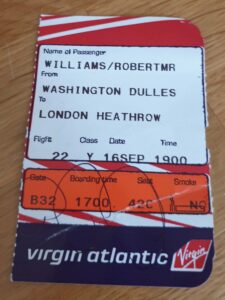 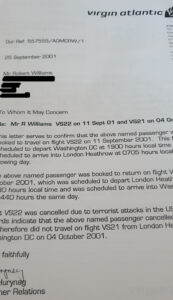 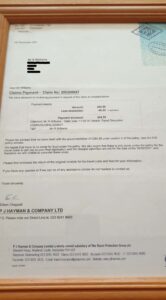 ‘In these troubled times, it’s good to be reminded that we’ve been through all sorts of challenges over the 31 years of our business – not the least of which was 9/11.

I do recall there were challenges with many Insurers as regards to the scope of coverage for this exceptional event…I’m glad that the claim was settled”.

In essence, P J Hayman was able to help because the insurers at the time adopted a pragmatic approach.’

If you would like the freedom to travel, let us help you find the right insurance solution for you.

Or, if we have helped you travel with confidence and/or you were happy with the service you received from the P J Hayman team, send us a review by emailing: marketing@pjhayman.com

To view, all our products and solutions click here.